I mentioned last week that I our first round of infertility drugs. I didn’t find that I really had any side effects of the Femara other than some uncomfortable pressure which I attributed to growing follicles.

I went Wednesday {day 12} for the follow-up ultrasound {hello again Wandy}. As I’d thought, I had two mature follicles on the right side & one on the left. As a IF newbie, I realized after I left that I didn’t really find out what they measured, but I think the two right ones were 16 & 18 maybe. She gave me another copy of the Ovidrel user guide, told me to do the shot Wednesday night, & sent me on my way with a good luck, see you after BFP or Day 1.

I don’t like shots. I don’t do needles. My least favorite part of a regular gyno appt is the finger prick. To say I was nervous about the shot is an understatement. But as Jason reminded me, I was more excited that the Femara worked {giddy really} & for the possibility to be pregnant this cycle, than I was scared for a not-so little needle. I cleaned the chubby left side of my tummy, clicked on the glass, pushed a tiny bit of medicine out, grabbed the chub, stuck the needle all the way in, let go of the chubs & pressed down shooting the meds in my body. The crazy blogger part of me wanted to photo all this but I needed both hands {sorry but y’all dont really wanna see the chub anyways}. I did photo the before {I need a cider for liquid courage} & after to share. 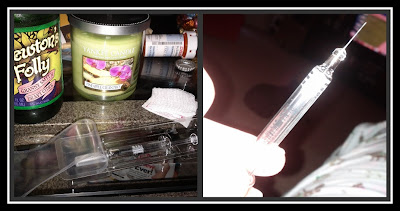 Afterwards I laid on the couch spent & Jason picked up dinner from Wendy’s {hello yummy Apple Pecan Chicken Salad!}. I felt a little itchy on the site but it wasn’t red. Later that night I started feeling more pressure and pulled on my comfiest pj pants before bed. TI went great that night!

I woke up Thursday morning on my stomach in pain. Like holy crap the pressure. I realized the extent of the bloat when I tried to re-wear pants I’d worn to work last week. They were very uncomfortable to button because of the bloat but I was running late & optimistic that it’d go down. The pressure did get a little better and maybe the bloat went down a tiny bit, but I still ended up sitting at my desk with the two top buttons undone for most of the day! I was going to have Jason take a photo before I met girls out for dinner & drinks last night {I changed into leggings & a empire-waisted dress} before I seriously felt huge so I didn’t even ask him.

We were a little late on the TI Friday morning as I’m not a morning person & there was some pain I wasn’t prepared for. The bloat was better Friday & a lot less pressure. I was more prepared outfit-wise with leggings and a long sweater for work. While there have been 15 cycles before now, I feel like our first real 2WW has began! Since I suck at secrets and am pretty much a semi-open book at this point, I’m sure y’all will learn how this cycle ends up soon after we do. Fingers, toes, teeth, hair, whatever you got, cross it for us!!

Only three GFC followers until my first giveaway! I’m really excited to be able to share this shop with y’all. So if you like what you see, I’d love for you to be an “official” follower. 🙂