Fellow Raleigh blogger, Adventuroo, recently started Capture the Everyday. Last week’s theme was something you couldn’t live without. I kept meaning to photo & post about my Diet Cokes, but I forgot.  Moving on. This week’s theme is your nightstand. 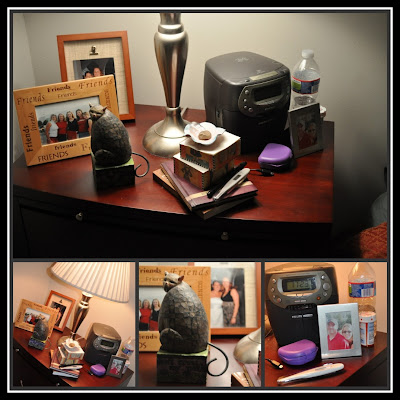 I took a few photos Thursday night of my nightstand {after I speed-dusted with the Tshirt I was wearing} as well as the one of Jason’s side of the bed. Mine includes three photos~ all are at least a couple of years old: one with college friends tailgating before a football game, the second at my sorority big sister’s Pawley’s Island wedding, & the one closest to my head at night is my first favorite photo of Jason & I which was also taking tailgating at a football game.
We have Target lamps on both nightstands. The alarm clock is now just used as a clock because I kept sleeping through the radio or CD playing. I use my cell phone’s alarm in the mornings and keep my phone charging here too.  A grey cat that my Ma gave me soon after we got Moe and a small flower spaced jewelry dish {which currently holds a rock I got at a church years ago} both also live on the nightstand.
The two books are both Christian daily prayer stories which sadly I don’t read often enough. Like others I will sometimes not be able to sleep because a to-do list that won’t leave in my head. This happened a lot while I was wedding planning. Now that notepad is frequently used to remind me of my BBT. Speaking of that, you’ll also see I have a thermometer, water bottle & my new thyroid medicine as well as my mouth guard {which keeps my TMJ under control} on my nightstand. 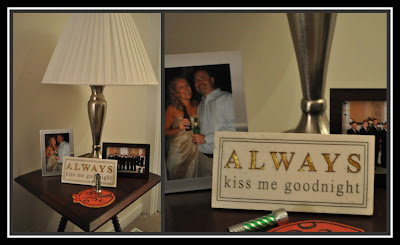 Jason side has two of his favorite photos from our wedding: he & I at the bar after the rehearsal dinner & he & his groomsmen. I gave him the Alway Kiss Me Goodnight sign a couple of years ago for Christmas since I love a goodnight kiss.  The little thing on its side is a tiny but super bright flash light which is great for checking to see what Moe’s doing in the middle of the night or looking into the closet which has a broken light.