Zach & Lucy experienced their first football game last Saturday. And I’m not talking about a pee-wee or HS game. We started them out right- a home NCSU game!

We enjoyed years of season tickets pre-babies but didn’t make it to a game last year. I really hoped we could make it work for a game this year.

When my dad, as a former football player, received the info on their annual Varsity Club game weekend, we jumped on it. With the help of my parents & aunt, Lucy & Zach experienced our traditional tailgate {if you sub milk for beer :)}. Friends stopped by, they saw the band perform the fight song & cheered for the players as they got off the bus. L&Z tried Bojangles chicken for the first time {big fans}, practiced saying hi & loved walking around checking it all out.

We left one ergo in the van, so Mom wore Zach while my aunt & I took turns with L inside the stadium. Seeing it all through their eyes {when they weren’t napping through the game} was so awesome. I might’ve teared up as the players came running on the field while she clapped at the fireworks. Sharing something you love & have waiting so long to experience as a parent is just the coolest thing.

I laughed with my friend Melissa that we had a goal of making til half time with all our kids. Not sure about her, but we were back snacking in our tent in the rain of halftime & the 3rd quarter.

We decided the day had been a success & made it home in time to watch the Wolfpack lose. So L&Z might’ve not been the good luck charms the pack needed last week, but it won’t be our last game for sure!

Five in a Row

Saturday I helped cheer on my NCSU football team as they beat UNC for the fifth season in a row! I think there was fourteen or so of us at the tailgate. We munched on Krispy Kreme donuts, my scones & cookies, ham & turkey biscuits, veggies & dips, & Bojangle’s chicken. My friends drank beer, mimosas, & skinny firefly. I drank water. Lots of water. I took 70+ photos & wish I’d taken more. Here’s a few of my favorites.

We came back out at halftime for a few more snacks & drinks. But we made it back before the 4th quarter & excitedly high-fived friends as we watched the Pack win!

Hope your team had as good of luck as mine this weekend!

Last Saturday was NCSU’s Varsity Club football game. Since my dad played football {he was an offensive guard ’73-’77}, he’s invited back with a couple of free tickets to the game. My parents came down & we invited Kelly’s parents & some other friends as well to have a big tailgate party before we watched State beat Central Mich.

The 1o of us split up into two cars. I was in the SUV that parked where we were tailgating, so while the others walked over, Brett, the dads, Kelly’s brother & I got the tailgate all set up.

A few rounds of cornhole was played with Kelly & whoever was on her team winning time & again.

Quality Tailgate if I do say so myself

We decided to break out the grill for hamburgers, hot dogs & bean burgers for me. Jessica & Michael brought their much beloved veggie dip {the hidden valley packet & sour cream} as well as veggies. I made those pumpkin surprise cupcakes, a pasta salad, & also brought chips & salsa. Sarah & Mike joined us & brought hummus & pita bread as well as some delicious toffee chip cookies. We had quite the spread of food as well as enough beer to go around {& around}.

I ended up with an extra ticket I wasn’t able to sell {husband working yet another Sat}, but Mom & I did make it in to see American Idol winner Scotty sing the national anthem & see the plane flyover.

Mom & Dad’s free tickets were way up high on the sunny side of the stadium. After sweating through the first quarter, we moved over to my normal section where people were wrapped up in coats {NC in Oct is crazy}.

We walked out at halftime to Mike & Sarah’s kickass parking spot for a little snack & another quick drink {or two}. After chatting & a few group photos, we headed back in to see the rest of the game.

Trophies are from bowl games my Dad played.

Saturday morning, I ran around getting ready for the second home NCSU game as well as a friend’s bridal shower. Strangely, fall arrived very early & the high for Saturday was a chilly & misty 62. Instead of my planned outfit {black dress & red accessories}, I ended up wearing jeans {thanks Lee for sending them to me} & a red long sleeve light sweater.

Rhiannon’s shower was held at her mom’s house about 45 minutes away. It was a beautiful house with fun pink decorations & filled with family & friends all there to celebrate.

We played BRIDE bingo while Rhiannon opened gifts. We left to head to the game before she finished opening all the gifts, but her family & friends gave her some fun things!

Kelly & I arrived at the newlyweds Jessica & Micheal’s tailgate. Jessica & Michael courageously got married during hurricane Irene then missed the first NCSU home game while they were unwinding in St Lucia. It was great to hear their stories & catch up with them on the truck tailgate.

Tailgating fun even in the rain.

After a few beers, a fleece & rain jacket slipped on, & munching on fruit, dips, & cupcakes, we barely noticed the rain & cold! We had a great time together & it was made even better that NCSU beat S Alabama 35-13.

Chi Omega sorority turned 116 Apr 5th. The NCSU chapter hosted a brunch to celebrate inviting local alum Saturday the 9th. My friend Kelly just sent me the photos this week. The house looked so pretty that I had just had to post. They’ve done a good amount of improvements since I lived there~ updated paint, shower stall doors, & much needed redecorating. I loved it then but so excited about the improvements! 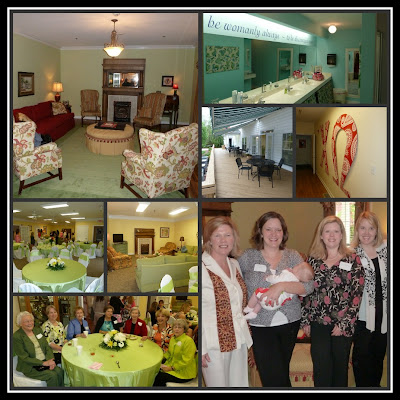 Also in attendance at the brunch was Kate S. who is now on our national board {a VERY big deal}. She’s from the NCSU chapter & lives locally. We presented her with a photo plaque which will be hung in the house. Kate also spoke briefly {along with current chapter officers} about the current state of Chi O & what exact she does in her national position. It was so cool! 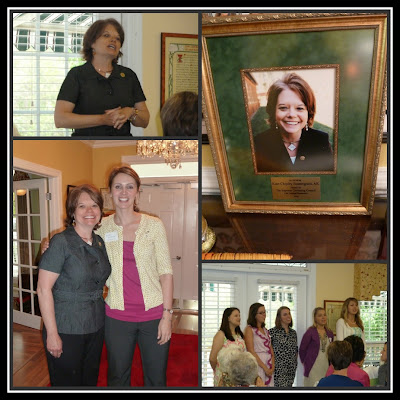 Sadly, Kelly’s camera battery died before she was able to get a photo of us too. {I’d left mine at home}

Were any of y’all in sororities? Are you active with other alum or your old chapter? I’d love to hear how others sororities celebrate things.