I finally had the chance to stop by to see Jenny & her miracle triplets this Saturday.  Sarah, Alethea & I got in lots of hugs with Toby & Eleanor who were awake or sleeping in our arms most of the time.  Jenny attempted to trick the internet aunties by dressing all three the same~ it worked at least at first.  Mom & Dad seem to totally have parenthood down pat.  Also, I saw Jenny cloth diaper in action & it didn’t seem too tough or overwhelming even though there’s three!

Those triplets are so cute, y’all!  I took over 40 pictures in the hour or so we were there!  Deciding which ones to share was so tough, so here’s a few big collages.

Callista was napping for a while {in their oh so cute room & cribs}, but I was able to hold her for a minute before it was time for her to eat. Rob fed Toby while Jenny fed Callista & Alethea held the sleeping Eleanor. {The photo below is from earlier though & of Toby & his early practice of the fine art of motor-boating.}  After feeding, Rob was rocking it holding both Toby & Callista!! 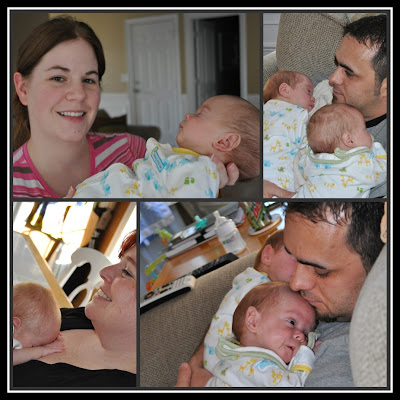 Thanks for having us, J & R.  I hope to be back for more baby snuggles soon!