After the SPCA Dog Walk, Mom & I ran a few errands. We stopped at Costco for last few ingredients for that nights dinner. We also picked up lunch for four of us for $8 {can’t beat that right?!}. 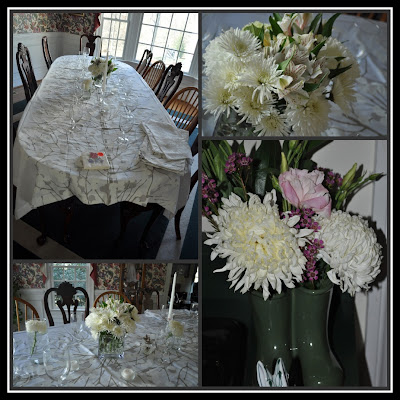 My parents had offered to host my brother’s future in laws & family to dinner last Saturday. There was a total of 12 of us. So after errands we rushed home to prepare. Mom had made a shrimp & crab pasta casserole the night before {it was awesome! I will be sure to post the recipe when she sends it to me}. We put together a salad with greens, strawberries, mandarin oranges, & mushrooms. We snapped the asparagus so it was ready to throw in the oven while the casserole was baking. 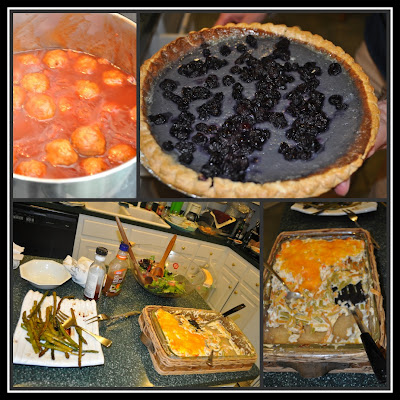 Mom had planned some great appetizers too. We made her famous meatballs {Jason had almost half of them!}. I also put together a recipe she’d told me about last time I was there since she know I love hummus. Crazy enough I saw it posted on one of the cooking blogs I follow this week. {I don’t remember which one but she called it her friend’s famous recipe!} I think her copy of the ripped-off-the-back-of-hummus-container recipe called it 5-Layer Greek Dip.
Ingredients
1 pkg hummus (we used larger size of roasted red pepper)
1 pkg crumbled feta cheese
1/2 c chopped tomatoes {we used quartered cherry}
1/4 c chopped cucumbers
2 T chopped kalamata olives {we omitted because we forgot to buy!}
Spread hummus on the bottom of a 9 inch pie plate. Cover with the remaining ingredients. We refrigerated for a couple hours then served with pita chips.

Beth’s brother Chris’ wife Emily is quite the cook. Like I’m in awe of cook. She brought a veggie pizza & a made from scratch lavender blueberry pie {see what I mean!}. Since my Dad’s birthday was Tuesday, we had also picked up a Cotco cake for dessert. 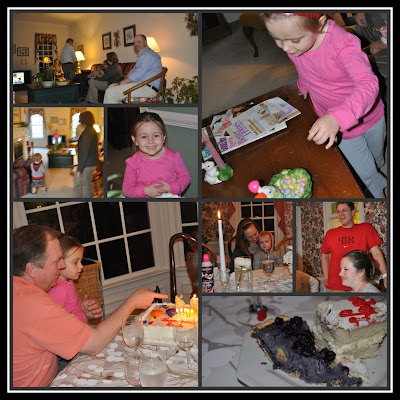 Emily & Chris have two awesome children. Marley is 4 and Miles is 2. They were so well behaved even though Miles wasn’t feeling so hot. Mom was a little worried what we’d do to entertain two young children in their not-childproofed-house. She decorated for Easter last Friday & got excited when she found Easter eggs. Y’all, while the guys played pool & watched basketball in the basement, Emily, Mom, Beth, Janie, Marley, Miles & I hid & found eggs for probably two hours!

Marley is quite the ham. Emily has a DSLR, so she’s used to being photographed & loved it while I pulled out mine. I’d show her a photo I’d taken, & she’d say “ok. another one”. {She’s a much more willing model than Moekitty & Jason!} 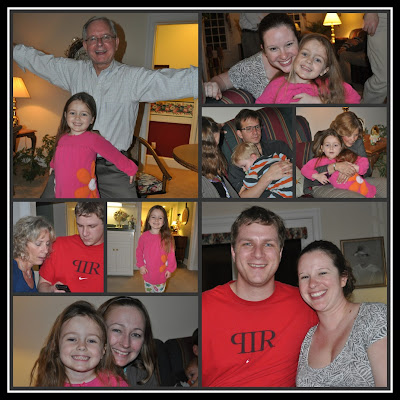 With upcoming wedding events this summer & fall, it was so nice to have a low key night to get to know everyone better! Can’t wait to hang out with the fam & my brother’s soon-to-be family again soon! 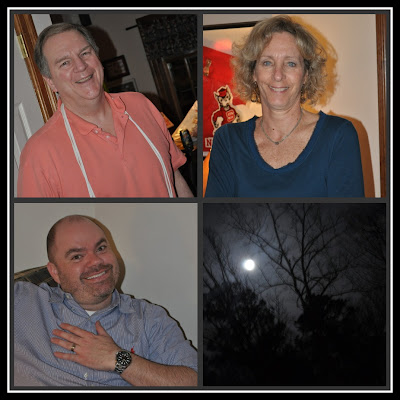 After everyone left the four of us were all smiles over how much fun we had together. Also how cool & bright was the moon that night?!