I judged the hell out of new parents that got rid of their animals. their pets. their furbabies when they brought the baby{s} home.

I thought it was ridiculous. You know when you get that animal that it’s for {their} life which would/could include the time when you have children. I thought it was lazy & reckless & careless & just plain mean.

And then I got pregnant with a lot of babies. Then I had two babies & no free time. And Moekitty went from the top of the totem pole to way below it.

He went from getting fed twice a day before I was pregnant, to me not being able to reach the floor to feed him, to me holding a baby {or two} & being unable to feed him. Now he gets fed when he lays in front of the bowl & stares at us & when I have a free hand {typically once a day}.

He went from having all our attention {& pets, & rubs & cuddles} when we’re home to having none of it. Except for me to push him off the couch so I could nurse right where he is lying. Or for Jason to shoe him away from the corners of the den where their toys or blankets are kept. Occasionally he’ll now curl up at my feet when I have the babies in my lap & I love that.

He went from sleeping next to me for 7 years to when I was pregnant, sleeping next to Jason, to when the babies were tiny, sleeping in the den. Now I’m not sure where he sleeps. The den sometimes I guess or the guest room when it’s not occupied.

He went from a bathroom of his own to do his business, to his litter box being shoved into the hallway since that bathroom is now for guests & babies’ baths. And that litter box used to be changed a couple times a week, now poor guy has it changed when the smell starts to follow me into the nursery.

He went from having the office window to view the front yard, to having that turned into a nursery & him being locked out of it. He lost the back yard views to the changing table & a pack-n-play being placed in front of the French doors & instead of his perch under the window, there’s now a weight bench that he’s too big to comfortably stretch out on.

I still {& always will} love the hell out of that cat. But he pukes more than before now that there are additional blankets, sheets & clothes for him to find & eat. That means more for us to try to keep out of his reach & more cleaning up for Jason to do.

My husband’s over being a cat parent when he busy being a twin babies parent. He’s very nervous now that the babies are becoming mobile what interaction Moe will have with L & Z. There has previously been little interaction & no lashing out by Moe {who has front claws} so far. We do not believe in declawing.

So this past week, when my husband came home from daycare drop off to find two new puke spots & Moe eating the bottom of the pack-n-play, he was done. He wanted to throw our indoor only cat outside then & there. I insisted we get him checked out at the vet & up on his shots {which I handled last Tues morning} before we made any decisions.

Jason’s sister, her husband, three children & their horses, dogs & cat live on 30 acres. They’ve agreed for Moe to move down & live with them. He’ll most likely be an outside cat there. But unlike being an outside cat here where he’d rarely see us {because we’re at work or busy inside with babies or sleeping}, he will get a lot of interaction with their outdoor loving family.

We don’t know when he’ll be moving away, but probably soon. I already think they’ll be more trips to GA in our future.

And I’ll be biting my tongue before I think or judge someone’s choices when I haven’t yet been in the situation. {Heartbreakingly sad} lesson learned.

I was going to save this photo for next week’s project 365, but I couldn’t wait to share it. I was showing it off to friends at a house warming party Saturday night {that’s what you do before kids, brag about how big your cat is} as I’d taken this right before I left to go there. They thought it was one of those fake internet cats. Nope, I assured them, this is MoeKitty in his finest cat bath mode with his red collar & chub rolls displayed. I love my fat old man cat!

Suz, this stays between us right?

Back at the end of May, Worlds Best Cat Litter sent me a bag of their new Lavender litter for Moe to try. I added some into his litter box once we got back from Memorial Day beach weekend & have continued to add it in after removing dirty litter for the last month.

Moe hasn’t minded the change one bit. I haven’t noticed any changes with him & his litter habits. Within the last week, I’ve noticed just how strong the lavender scent is as it had kind of taken over that end of the house. While I like the smell of lavender, I have now began to mix the lavender scent in with the multi-cat litter we love.

I have not yet been able to find the lavender litter in my local Target or Petco {my usual pet purchase spots}, but I do plan to continue to use it along with the WBCL multi-cat version.

While WBCL did awesomely send Moe a bag of the new lavender litter, our opinions are all our own.

This past Saturday, my mom, future-sister-in-law Beth, her step-mom Janie & I participated in the Richmond SPCA‘s 5k & Dog Walk. Beth had signed up a while ago & after giving a donation Mom & I decided we wanted to do even more. This weekend worked out well to go up to VA and have a meet-the-future-family get together! 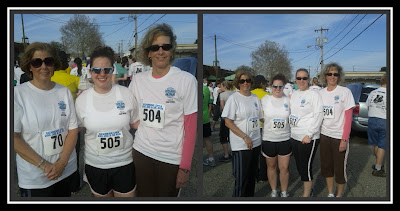 Janie, Mom, Beth & I posed before the 5k. Admittedly, we walked & chatted & definitely brought up the back of the pack. But we had a great time getting to know Janie & catching up with each other.

We had about 45 mintues in between the 5k and the 1 mile dog walk. We decided to check out the SPCA & the dogs & cats. I’ve never been inside another SPCA, but I’d image this is one of the nicer ones. The cats photo’d belong were in two different cat condos. They big rooms filled floor to ceiling with cat favorite things: ramps, drawers pulled out as beds, cubby holes, beds, & Saturday, lots of visitors to impress. That little black & white cat stole my heart. 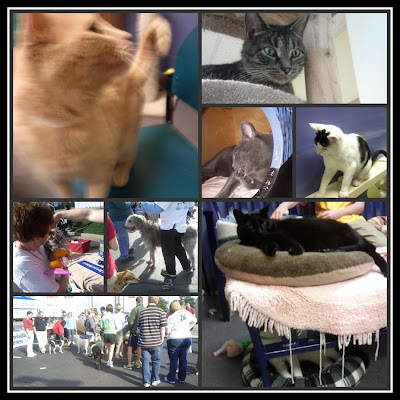 My brother, Steven, & his future-father-in-law Rob joined us with my “niece” Quin for the walk. She was one of the smaller of the dogs out there among Great Dane, a Irish Wolfhound {probably one of the coolest dogs I’ve ever seen}, English Mastiff, lots of labs, goldens, & muts. There were a few tiny dogs, including the one the lady was holding below who was wearing glasses! I was happily surprised how quiet & well behaved they all were. Quin was so happy & excited & she definitely was leading our family pack. Beth & Steven said she was spent though & slept the rest of the day! 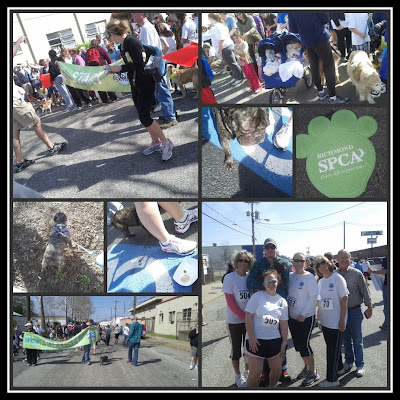 The Richmond SPCA has continued it’s donation efforts for the next couple of days. If you like what you saw here & want to help out this awesome no-kill SPCA, please feel free to visit my page “Quin’s Family” to make a donation.

Melissa over at Adventuroo‘s theme for this week is your child’s favorite toy. I love her Captured: the Everyday idea & hated to miss out on this week because we don’t yet have a child or children’s toys here. So I tweeted her to make sure MoeKitty & his toys {aka my furbaby} counted. She said sure & I snapped away Friday night.

Moe’s favorite all time toy was a Target octopus. I bought three of them so that he’d have replacements. Except he loved it so much that he carried it to bed, shook it around all the time, then started eating the legs. We went through all three pretty quick & then I couldn’t find it anymore. 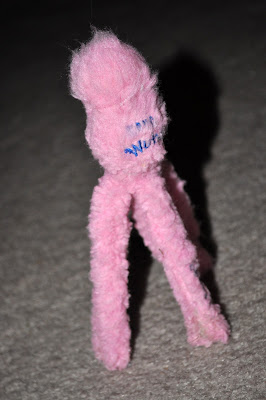 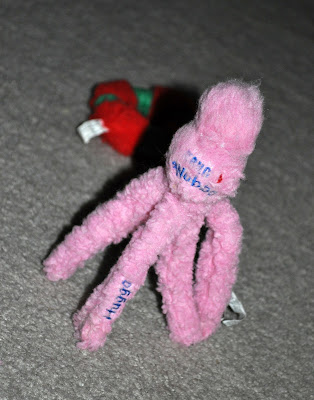 My best replacement is the Wubba Hugga. This pink guy is actually Moe’s second one. The first was blue & loved it then ate the legs {I guess you’ve discovered this is a pattern with him}. He knows that real cats can rock pink, but he hasn’t taken to this Wubba quite like the first. But it’s definitely his favorite go to toy of the moment.