I don’t think I’ve posted yet about my grandparents’ new puppy! They welcomed him home right before July 4th. I even got him a lil July 4th T-shirt for the occasion (but he ran round too quick for me to get a good pic of him in it!). Bocce is a Bishon Frise and only weighed around 3 lbs the first time we saw him. He fit under the couch, the end tables & the lazyboy foot rest! 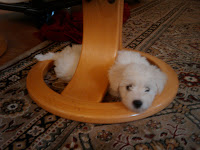 Jason & I were down there at the end of July and he’d grown so much! (But ran around so much Nana had to hold him still) 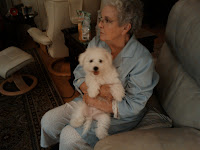 We saw him again labor day weekend and Mr. Bocce is now around 7 lbs. Mom & I took him on his first beach walk that weekend, but we forgot to take a camera with us. 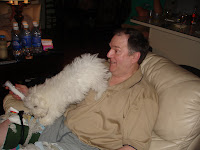 Here’s one of my dad & Bocce. He loved trying to chew on Dad’s heating pad wraps which meant his lil booty was in my dad’s face!!