When I told Beth that I’d bring them dinner once they got home and settled with baby Reagan, I knew exactly what recipe I’d try: Pioneer Woman’s Chicken Spaghetti. It’d been flagged in my cookbook since the day it arrived on my doorstep. My mom has similar recipes & combined PW’s with her own & warned me it made a lot of food. So as a heads up to you, make this dish with friends or a freezer in mind.

I’m going to list exactly what I did which was a little different than the fabulous PW. Only because I’m a little lazy and I don’t do whole chickens.

Ingredients
1 rotisserie chicken, deskinned, pulled off the bone & chopped by your husband {he rocks & he’s all mine}
box of chicken stock
1 lb thin spaghetti, broken into pieces
4 oz jar diced pimientos, drained
1 small onion {we don’t love onions & my medium-small one was too much for us}
1/4 c finely diced green bell pepper
2 can cream of mushroom soup
grated cheddar cheese {I used a whole 12 oz bag plus a little extra from another bag}
1 tsp seasoned salt {I used Lawry’s}
ground white pepper
1/8-1/4 tsp cayenne pepper {I used 1/8 since Beth’s breast feeding. For us, I’d have used more}

Directions
As you can see from my ingredients, instead of boiling a whole fryer chicken then using that stock. I bought an already cooked chicken & bought the stock. While Husband took care of the chicken, I mixed water & stock to make a little less than 3 c that I set aside. In a pretty large pot, I mixed water & the rest of the chicken stock. Once that had boiled I broke up the spaghetti into fours & added them to the water. 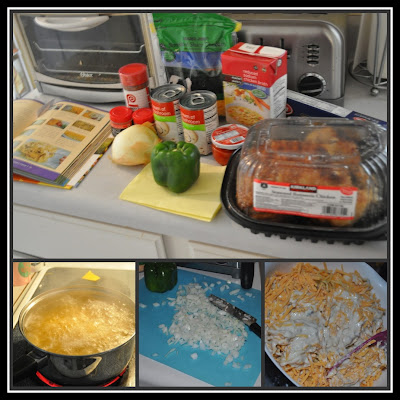 I sliced the onion {should have done even smaller} as well as the green pepper. I also drained the pimientos. I drained the spaghetti and threw it in what I considered to be a large bowl. Use the LARGE bowl because I had to dump it into another bowl. Add the soups & 2 c of cheese to the spaghetti. Top that with the onion, pepper, pimientos & seasonings. Finally, top with the chicken as well as the stock. Stir it all together. See why I said to use the LARGE bowl?! PW said to taste test. I try to do what she says, so I tasted! 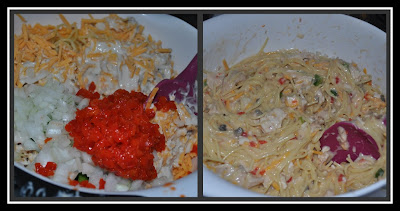 Pour into pan(s). I used a aluminum 9×13 pan for our friends & a 8×11 not as full one for us. Top with remaining cheese. PW recommends another 1/2 c in the cookbook but says more online. I probably did a little more. Recipe says ok to keep covered in frig for a couple days or frozen for a couple of weeks. It didn’t last that long in our house. I covered both and refrigerated for a couple of hours before taking one to our friends & us having the other for dinner. 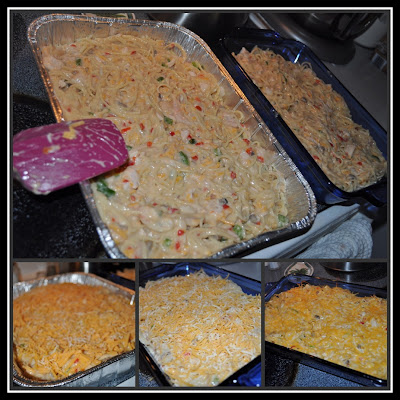 Bake at 350 for 35-45 minutes. I baked covered for 30 then uncovered for the last 15 minutes. Enjoy! Then keep enjoying the leftovers!