After Saturday’s OT loss to ECU, my heart is a little less pumped about NCSU’s football season, but I still want to share with y’all photos from last Saturday’s game. My parents came in town for the game and my aunt Sue also went with us. The game was at noon which is my least favorite game time: less time for tailgating and right in the heat of the day. Since it was an early start, I made an apple cake, Tastefully Simple beer bread, Fiesta Dip (which I spruced with with a drained can of Rotel), broccoli, cucumber, Scoops, Bojangles chicken strips & biscuits, and fruit salad. Nine am is a little early for a cold beer, so we brought Bloody Marys & I made a Firefly Lemonade with the Tastefully Simple lemonade mix {we saved the beer for halftime}.

We also brought the new gingham table cloth my Nana made for our tailgating card table and the corn hole boards & bags Pawpaw & Nana made for us. The cornhole was a hit! Mom & Sue were cornhole newbies but they did great~ beating Jason & I in a close game. Family friends Brad C & his son Casey stopped by and pretended they were cornhole newbies. They easily beat the sisters. We switched up the teams and Brad & I were doing ok, but then the NCSU band stopped right in front of our tailgate so we forgot about the game & cheered them on instead.

As usual, I didn’t bring my camera into the game, but since I had my parents’ I took a few photos of the team coming out onto the field. 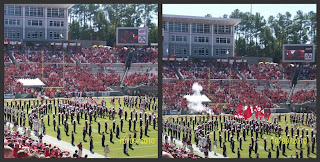 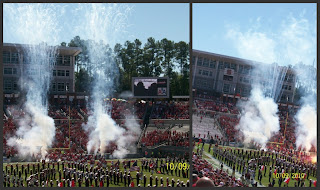